CERC Celebrates the 504th Anniversary of the Reformation

Celebrating the Reformation is a deeply personal occasion for Reformed Christians every year. The Reformation commenced in 1517 and drew to a watershed moment with Martin Luther at the Diet of Worms in 1521. Modern Protestantism was born from the Reformation and is shaped by it. Nevertheless, the church has not stopped battling with heresies both inside and outside of the church in the last five hundred years. Hence the need for the Protestant church to continue examining its doctrines and practices in order to keep reforming herself.

This year, CERC celebrated the 504th anniversary of the Reformation on 31st October in tandem with preaching on the book of Titus as part of a two-year biblical theological series called God’s Story. It was a church-wide celebration with even the youth and children having their own Reformation celebration parties.

Reformation Sunday is an occasion for Christians to revisit and appreciate precious church history, such as Luther’s trial at the Diet of Worms in 1521, and also to thank God for the work He is doing in His church. 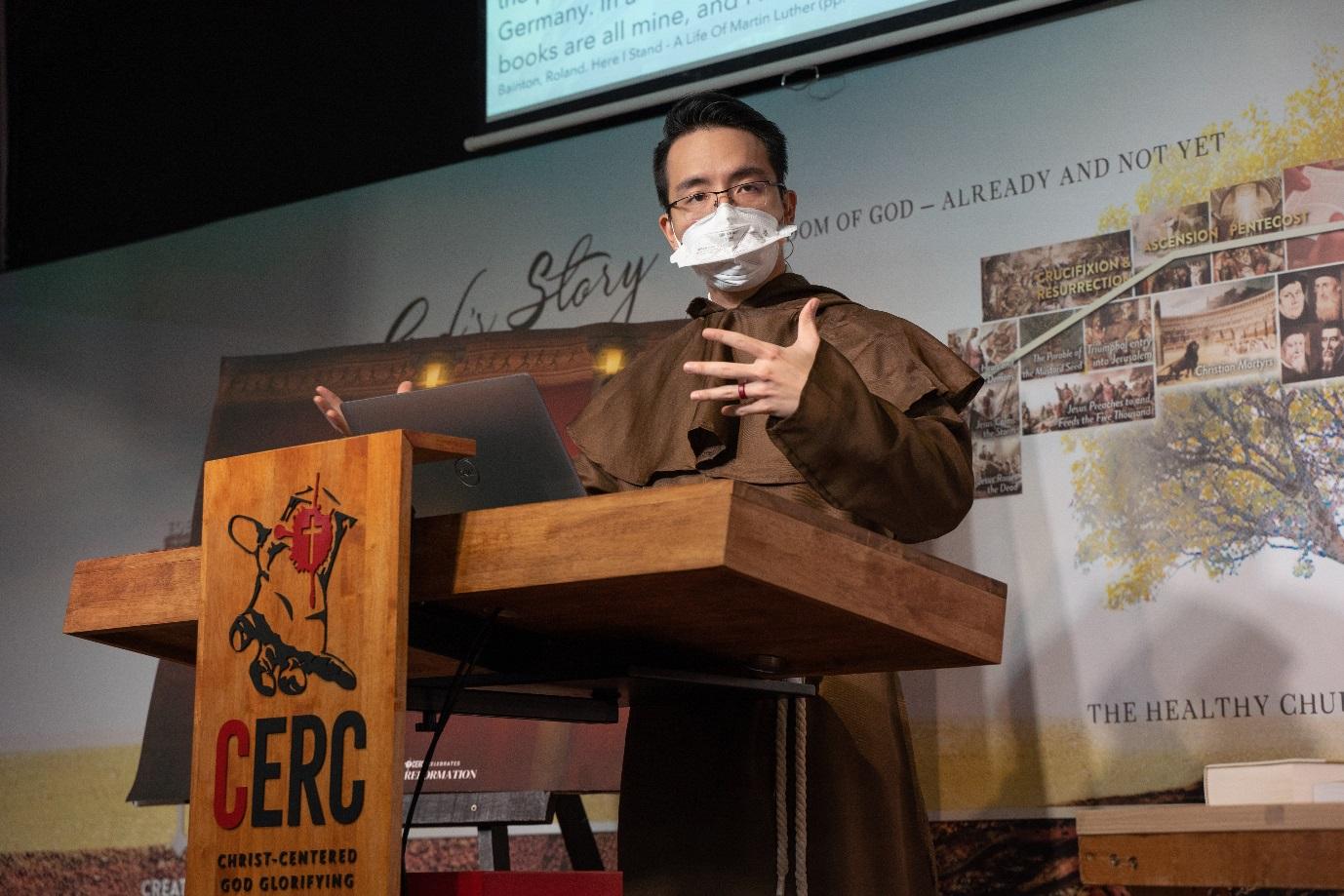 Dressed in a brown faux monk outfit, the emcee, pastor-in-training Jerome Leng (pictured above) read a few selected passages from Woodbridge’s Church History, Volume Two: From Pre-Reformation to the Present Day: The Rise and Growth of the Church in Its Cultural, Intellectual, and Political Context, and the biography of Martin Luther Here I Stand by Roland Bainton as a first call for CERC Christians to take a stand for the gospel today.

The readings were followed with a couple of video interviews with Robin Gan, the Founding Elder of CERC on why CERC is Reformed (see Part 1, 2 and 3 here)

Robin first defined what it means to be Reformed — “… it has to do with the way we are dedicated to Sola Scriptura, to the authority of Scripture in our lives, in our practice, in our confessional statements.” He then shared an anecdote from his nascent years of ministry in a particularly established denomination he had served in after initially returning from his seminary training in Moore Theological College. The anecdote demonstrated that the layperson in church today does not understand the basis of the church’s doctrinal statements as gleaned from the Scriptures and may even be ignorant of its contents.

“When you come to a point of life where you’ve already lost both the Bible and Reformation dedication and understanding, then obviously your doctrinal statement won’t do anything for you. To be Reformed is not simply to have confessional statements or even to repeat them on a weekly basis. To be Reformed ultimately is to have Scriptures above you… So in CERC… we’re trying to help you read the Scriptures, we’re trying to maybe create an Anfechtung moment for you… we’re trying to help you see the same things that your Luthers, Calvins, Augustines, realized from reading the Scriptures, so that not only are you a Christian, but you’re a Christian who is dedicated to God in the way the Reformers were, in a Soli Deo Gloria way… So being a Christian not only means you’re saved. It also means that as a people of God, we are under His Word… A Reformed church is very much immersed in Scripture, because they are immersed in this reality of being united with God’s Christ Jesus.”

This was Elder Robin’s short explanation of CERC’s identity and ministry as a Reformed church.

The congregation was then challenged by Jerome with a series of questions: Do we still need a Reformation today? Where is the Protestant Church today? Do we still uphold the five Solas today?

To aid in our reflection, Jerome highlighted some significant ecumenical efforts between the Roman Catholic and Protestant churches in recent decades — a key one being the signing of the Joint Declaration on the Doctrine of Justification (JDDJ) by Lutherans and Catholics in 1999, apparently resolving to resolve the central debate of the Reformation. He also mentioned other ecumenical initiatives like ‘Evangelicals and Catholics Together’ (ECT), and quoted Michael Horton regarding the initiative— “… divine acceptance is said to be by God’s grace rather than human merit, although ECT placed this question on the list of continuing disagreement while nevertheless expressing agreement on the gospel.”

It begs the question then, for the thinking Christian today, what exactly is the gospel? Why did Luther take a stand half a century millennia ago, and put his life on the line before the Roman Catholic Church, if not for the gospel gifted by God through His word? And if he did, how can ecumenical efforts proceed between Catholic and Protestants by stating agreement in the gospel?

These reflections were meant to lead the congregation to consider whether the church has given up the gospel in the name of ecumenism and social unity, rather than holding on and standing firm for the gospel in all its fullness. The preamble was a fitting build-up and preparation for Elder Robin’s Reformation sermon.

In his sermon, Elder Robin (pictured above) reminded the congregation that Christians should be diligent in following Christ through many tribulations “rather than through the false security of peace” (quoted from Luther’s 95th point from his 95 Theses). Various gospels in the 21st-century are not new, and similar departures from the gospel had arisen even during Titus’ time, as well as Luther’s. But he then went on to stress the inseparable link between faith and practice, belief and behaviour for the entire church, from church leaders to leaders-in-training to the lay member, as a full-fledged defence of the Reformed Gospel. Such living stems from an understanding of godliness birthed from a thorough and robust love of the Gospel rooted in the fully authoritative Word of God, right teaching, and sound doctrine. That is, an understanding that is continually being reformed by the Word. Thus, Elder Robin exhorted all members who have been called by God to be holy, saved by grace through faith for God’s glory, and profess to love the Word, to renounce ungodliness and worldliness, and to live a life in active pursuit of obedience and love.

Titus was indeed a fitting book for Reformation Sunday. The church gathered twice, at, 10AM and 5PM in order to hear these things and be encouraged in the spirit of the Reformation.

Elder Joel Lee was also formally inducted as part of the CERC Council of Elders in the morning gathering. As explained by Elder Robin in his brief interview with Elder Joel , the Council will be needed to help run the church and guard it against false teaching and opposition as the church continues to grow in number. Thus, in the spirit of the Reformation, it was appropriate for the church to witness the expansion of its Council of Elders as more and more able men mature into shouldering the mantle of maintaining, defending and reforming God’s church and His gospel in the Klang Valley.